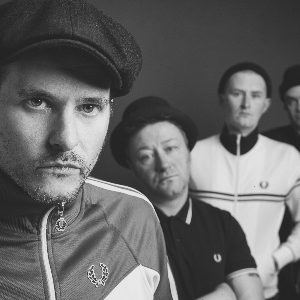 Back for our 4th Outing, A Fistful of Ska all-Dayer returns to Leeds

Music is supposed to be about having fun and it’s practically impossible not to have a good time when listening to Buster Shuffle.
Formed in 2007 by Jet Baker, Buster Shuffle quickly built up a formidable reputation on the London pub/club circuit, effortlessly fusing cockney Ska Punk with authentic Rock and Roll influences.
Buster Shuffle teamed up with Art Brut’s Ian Catskilkin to produce 2010 debut album ‘Our Night Out’, which esteemed British music magazine, Uncut, gave four out of five stars. It went on to win a number of high-profile fans in the process, including BBC radio giant, Steve Lamacq and Pixies legend Frank Black.
The band went on the road around the UK and supports with Madness, The Blockheads, The Selecter, The Wombats and The Beat along with sold out in-store Fred Perry subculture gigs enhanced the band’s burgeoning reputation.
In November 2017 Buster Shuffle released their 4th studio album titled “I’ll take what I want’. This latest offering is heavier, punkier and is a massive statement of intent from a band that is bigger and stronger than ever. Their debut single “I don’t trust a word you say” was premiered by the worlds most read newspaper, London’s “Metro” with readership of over 1 million per day. Having made their first forays into the USA, Canada and Mexico, Buster Shuffle have their sights firmly set on world domination.
2018 sees Buster already confirmed for many Punk Rock Festivals worldwide including the prestigious Punk Rock Bowling in Las Vegas on their 20th anniversary show in May.
…
Also Staring
Dakka Skanks
Deadbeat at Dawn
Flatcap Carnival
Skiprat
And keeping it all together The Bootboy Radio DJs