A Night In With Gary Numan 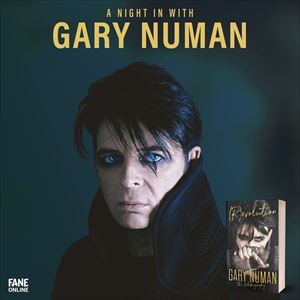 Gary Numan
All A Night In With Gary Numan performances

A Night in with Gary Numan
Expelled from school. A record deal at nineteen. Four bestselling albums and two world tours by the age of twenty-one. A stratospheric rise to success quickly followed by a painful decline into near obscurity.

The godfather of electropop, Gary Numan, has seen it all.

From humble beginnings in Middlesex, where money was scarce but dreams were encouraged, to becoming the award-winning pioneer of electronica, he has an incredible story to tell.

Now, Gary has written the music autobiography of autumn 2020, R(evolution): a rollercoaster rise and fall (and rise) of one man, several dozen synthesisers, multiple issues and two desperately different lives. To celebrate its publication, join Gary live in conversation, in his own words. He'll touch on his battle to reconcile the transient nature of fame with his Asperger's syndrome, the importance of his fans, and why Savage reaching #2 in 2017 meant more than the heady heights of 1979.

By turns hilarious and deeply moving, this promises to be a brutally honest reflection on the man behind the music.

We are partnering with some of the country's top regional theatres and independent bookshops, and are pleased to be able to offer two ticket packages. The 'book and ticket' package includes a unique ticket for the live stream, and a copy of 'R(evolution)', deliverable to any UK address. The standard 'ticket' package consists of a unique ticket for the live stream only.
The event will initially be broadcast on 4 November at 18:30 UK time. It will be available to view up to 48 hours after the event has ended and can be accessed Worldwide.