A Night In With Mark Watson 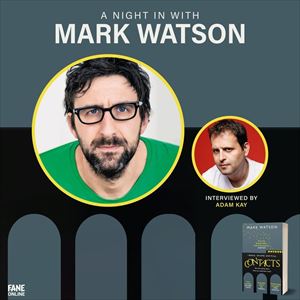 A Night In with Mark Watson and Adam Kay
James Chiltern boards the 23:50 sleeper train from London to Edinburgh with two pork pies, six beers and a packet of chocolate digestives. At 23:55 he sends a message to all 158 people in his contacts, telling them that he plans to end his life in the morning. He then switches his phone to flight mode. He's said goodbye. To him, it's the end of his story - and time to crack open the biscuits.
But across the world, 158 phones are lighting up with a notification. Phones belonging to his mum. His sister. His ex-best friend. The woman who broke his heart. People he's lost touch with. People he barely knows. And for them, the message is only the beginning of the journey.

Acclaimed author and stand-up comedian, Mark Watson, is celebrating the publication of what is being hailed as ?his best book yet', Contacts. For this exclusive livestream, Mark will be live in conversation with best-selling author and 'ward-w'nning performer Adam Kay for what promises to be a thought-provoking and uplifting evening.
As well as answering your searching questions, Mark and Adam will discuss the importance of kindness, the weight of loneliness, and how it's never too late to reach out. You don't want to miss this.

Mark Watson is the acclaimed author of six books, most recently The Place that Didn't Exist, Hotel Alpha, and The Knot, which have been published in twelve languages. He is also a stand-up comedian and has won numerous awards in Britain and Australia. He regularly appears on TV, has had his own cult Radio 4 series and been named the Edinburgh Festival's highest achiever of the decade by The Times.

Adam's first book, This is Going to Hurt, revisiting his former career as a junior doctor, has spent over a year at number one in the Sunday Times bestseller list. It was the bestselling non-fiction title of the decade, it is the bestselling non-fiction e-book of all time, and has sold over 2.5 million copies. As an award-winning live performer, Adam has sold out multiple Edinburgh Fringe runs, West End seasons and UK and international tours. His current tour of This is Going to Hurt has been seen by over 200,000 people.

We are partnering with some of the country's top regional theatres and independent bookshops, and are pleased to be able to offer two ticket packages. The 'book and ticket' package includes a unique ticket for the live stream, and a copy of 'Contacts', deliverable to any UK address. The standard 'ticket' package consists of a unique ticket for the live stream only.
The event will initially be broadcast on 2 November at 18:30 UK time. It will be available to view up to 48 hours after the event has ended and can be accessed Worldwide.