A Night In With Philip Pullman 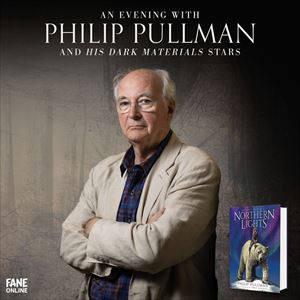 All A Night In With Philip Pullman performances

and His Dark Materials Stars

AN EVENING WITH PHILIP PULLMAN - AND HIS DARK MATERIALS STARS
To celebrate the 25th anniversary of Northern Lights, join the award-winning author Philip Pullman in conversation with people who have been influential in bringing the His Dark Materials trilogy to page and screen - plus readings from the books by actors from the acclaimed BBC/HBO series (actors' names to be revealed soon).

Philip will be joined by Chris Wormell (illustrator of the new Northern Lights Illustrated Edition), Jane Tranter (co-founder of Bad Wolf who created His Dark Materials for BBC/HBO) and David Fickling (publisher of Philip Pullman for over 25 years).

Expect Philip to reveal secrets behind the landmark trilogy as well as an exclusive look at the creation of the new illustrations and footage from season two of His Dark Materials.

First published in 1995, and acclaimed as a modern masterpiece, Northern Lights has been fully-illustrated in colour by Chris Wormell for the 25th anniversary (published by Scholastic).

"After nourishment, shelter and companionship, stories are the thing we need most in the world." Philip Pullman

Fane Online is a curated series of broadcast-quality live-streamed events, giving you the chance to watch exclusive shows with celebrated authors, actors and podcasters, all from the comfort of your own home.

We are partnering with some of the country's top regional theatres and independent bookshops, and are pleased to be able to offer two ticket packages. The 'book and ticket' package includes a unique ticket for the live stream, and a copy of 'Northern Lights', deliverable to any UK address. The standard 'ticket' package consists of a unique ticket for the live stream only.
The event will initially be broadcast on 6 November at 18:30 UK time. It will be available to view up to 48 hours after the event has ended and can be accessed Worldwide.