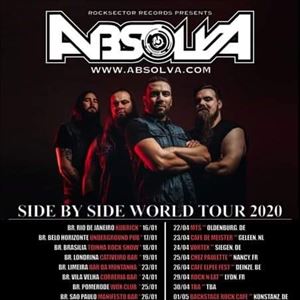 Absolva
All Absolva performances
Have tickets to sell? – Find out more

Absolva is fronted by Chris Appleton, a guitarist carrying the spirit and feel of blues-era Gary Moore into the metal arena, throwing the thrills and tricks suggestive of a new Joe Satriani, whilst projecting his melodic vocals and personality as a true master frontman in the rock genre.

Accompanied by brother Luke Appleton (also known as bassist with US metalheads Iced Earth), who is an imposing and powerful rhythm guitar player, going on to complement his older brother with some electrifying lead playing and backing vocals. This results in the delightful impact of twin harmony guitars reminiscent of Thin Lizzy at their best.

On drums it's as if John Bonham decided to project his spirit into the consciousness of Bill Ward, a true heavy rock drummer in the metal genre. Martin Mcnee, often called 'The Machine', is the embodiment of the archetypal powerhouse rock/metal drummer, skilfully combining the technical gift with groove and feel.

Completing the bedrock rhythm section is the granite-like toughness of Karl Schramm's bass playing, very much his own man, but with an undeniable nod to his biggest influence – Steve Harris, the bass playing legend of British metal heroes Iron Maiden.

To accompany the outstanding musicianship and performances, Absolva has an enviable catalogue with four studio albums and one live, containing riffs, melodies, fretboard theatrics, with the most treasured gift of truly memorable songs.