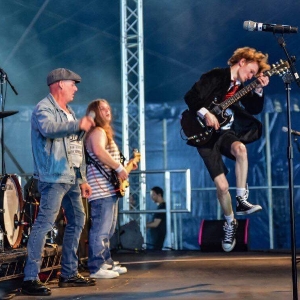 HELLS BELLS: Tribute To AC/DC
Formed in 1996 and hailing from Bristol, Hells Bells has evolved into perhaps the most well known and professional AC/DC tribute band in the United Kingdom.

Touring the length and breadth of Britain & Ireland for over 23 years playing the music of the legendary AC/DC, Hells Bells have built up a loyal following of fans and continue to do so wherever they play.

From the blistering scream of the vocals, the duck-walks, the pounding rhythm & bass and the frenzied schoolboy antics to the booming cannons and pyrotechnics at the finale. The camaraderie of all 5 musicians is second to none and the excitement & passion shines through the music. All the elements are there for an awesome show of spectacle and power.

Hells Bells have played alongside a number of established and successful bands through the years such as Status Quo, Fun Lovin’ Criminals, Company of Snakes, Wilko Johnson band to name but a few and have a garnered some extremely positive feedback from their performances:

“One we have seen and recommend” - Classic Rock magazine