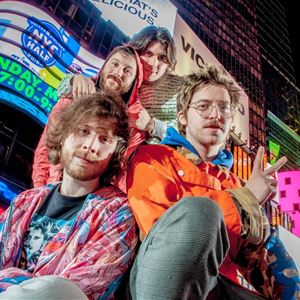 Combining the setup of a traditional four-piece rock band with the digitized sounds of a hacked 1985 Nintendo game system, Anamanaguchi are an innovative chiptune punk band from New York. Influenced by both the mainstream pop of Weezer and the Beach Boys, and the old-skool NES games Super Mario Brothers, Zelda, and Megaman, the group consists of Peter Berkman, bassist James DeVito, guitarist Ary Warnaar, and drummer Luke Silas. Formed in 2004, the band has become famous for its unorthodox music-making methods, based on writing melodies on the Nerdtracker II program, layering conventional instruments over the top, and feeding them through an NES while performing live. After extensively touring in the U.S. and U.K. and the release of their debut album, Dawn Metropolis, free through their website in 2009, they got their big break a year later when they were approached by Ubisoft to record the soundtrack for their video game adaptation of the Michael Cera movie Scott Pilgrim vs. the World. The album debuted at number three on the Billboard Heatseekers chart, while their music has also been used in the Wii title Bit.Trip Runner and multi-console versions of Rock Band. Before the recording of their next album, the group launched a Kickstarter campaign that ended up raising double what they asked for, allowing the band to launch an extensive tour with a custom-built stage and light show. Endless Fantasy was released in spring of 2013 on their own dream.hax label. The next year, they released "Pop It," a J-pop-inspired single featuring vocals by a female singer known as Meesh. The catchy track was featured in commercials for Target's fall style collection. In early 2016, while preparing their next album, Anamanaguchi surprised fans by releasing a video game called Capsule Silence XXIV, including 30 new pieces of music from the band. It was followed later that year by the single "Miku," which featured an appearance by Japanese virtual pop star Hatsune Miku. ~ Jon O'Brien