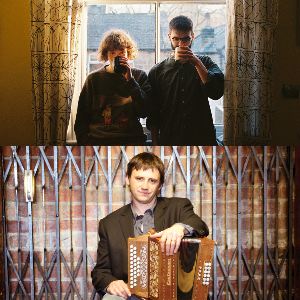 Owen and Louis' debut album 'You, Golden' manages to orbit many different sound-worlds while staying within the acoustic context of English folk music. As a duo, they distil their love of traditional and experimental music into powerful, intricate and intimate music. Owen is studying composition at the Royal Academy of Music and working with Cosmo Sheldrake. Louis studied guitar at the Royal Northern College of Music. He joined the Sam Sweeney Band at 19 with Sam Sweeney, Ben Nichol, Jack Rutter.

A musician’s musician: a soulful and technically outstanding diatonic button accordion player with an ear for a fine tune. Recent tours and performances: Solo, Leveret with Sam Sweeney, Rob Harbron, Topette!! with Tania Buisse, Julien Cartonnet, James Delarre, Barnaby Stradling, duo with Belgian diatonic accordion player Anne Niepold, The Who at Royal Albert Hall. “In my musical life I’ve been lucky to work with a few musicians that I would call a genius, Andy Cutting without a doubt is one of these people." John McCusker