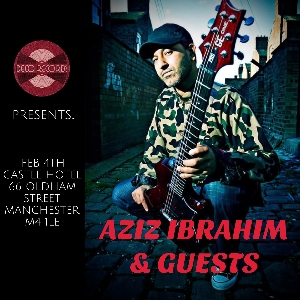 Aziz Ibrahim is best known as a guitarist with The Stone Roses/Ian Brown, co-writing songs such as "My Star", "Corpses in Their Mouths", "Longsight M13", "One Way Ticket to Paradise" and numerous other tracks from “Unfinished Monkey Business”, “Golden Greats”, “Solarized”, and “The Greatest”.

His first release the “Middle Road” EP featured guest vocals and guitar from long-time collaborator Weller.  In addition to providing guitars on a number of Paul Weller releases, he also provided the vocals for Weller's spoken word song, "God", on 2008 album, “22 Dreams”.

Aziz followed this creative collaboration with début album, “Lahore to Longsight”, which he describes as 'Asian Blues', and references his family’s journey from Pakistan’s second city to his birthplace in inner city Manchester, where he still lives.   The album ‘Rusholme Rock with tabla master Dalbir Singh Rattan, all showcasing his unique blend of progressive rock and Asian Blues.

In addition, Aziz scored the music for free-style 3D shooter PlayStation game “Eliminator”, and has been involved in a number of Arts Council England and other socially engaged projects.  He recently composed a South Asian symphony for the Manchester Camerata Orchestra selling out HOME’s Theatre 1, further demonstrating the value and versatility of his natural gifts.

This performance for Deco Records will not be a Stone Roses tribute show, but an opportunity for this supreme musical talent to showcase his #DesiGuitR craft and new material.

This is a low-capacity venue, so grab your tickets now for Manchester’s #LordOfTheStrings