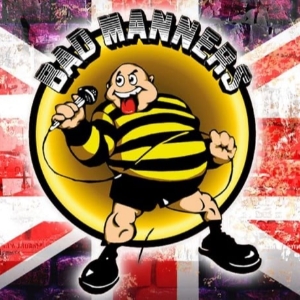 Formed in 1976, and this year celebrating 40 years of Mod Mayhem, this legendary British Ska band are still packing venues out all over the world.

Led by legendary live-wire frontman Buster Bloodvessel, Bad Manners made their name in the Ska revival of the late 70s and early 80s alongside the likes of Madness, The Specials and The Selecter. They spent 111 weeks in the UK Singles Chart between 1980 and 1983, and they also achieved chart success with their first four studio album.

Some of their more notable hits include "My Girl Lollipop", "Lip Up Fatty", "Can Can", "Special Brew" and "Walking In The Sunshine". One of the main reasons for their notoriety, was their outlandish huge-tongued and shaven-headed frontman. His manic exploits got them banned from the British BBC TV chart show Top of the Pops. The band was also banned from Italian TV after Bloodvessel mooned a concert audience, after being told that the Pope was watching on TV.

If you want a big noisy ska-fuelled party, with added helpings of nostalgia, then look no further than the mighty Bad Manners.

AGE RESTRICTION: Under 16's must be accompanied by an adult?