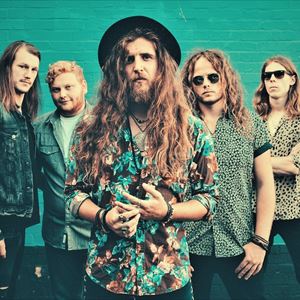 There is NO BAR at Livewire Youth Music but we have a pub The Union Inn right next door and folks are allowed to bring drinks in (in plastic glasses) from the pub or BYO.  Do do however sell soft drinks tea and coffee and snacks.

Bad Touch originally formed in 2010 when the band members were still in college. In their formative years, they played local pubs and performed covers of some rock classics, and gradually began to compose original material. Over the last few years Bad Touch have started making a name for themselves and built a reputation for their dynamic live shows, making them on of the “must-see” acts at many local venues.

In 2012, the band recorded their first EP at the Leeders Farm Studio – home of local hero’s The Darkness. The desire to get their music to a wider audience eventually led the band performing gigs around the country. In 2012, the band won the Exposure Music Award in 2012 for their live show, followed by an invitation to play Hard Rock Hell for the very first time.

2013 was a great year for the band. They toured the UK with The Quireboys and won the Marshall Ultimate Band Contest. In 2014, they toured with Bonafide, The Electric Boys and Tyketto, and played many festivals including Download, Steelhouse, Legends of Rock and Hard Rock Hell.

In 2015, the band recorded their debut album Half Way Home at Foel Studios. Released on 27th April, the album received rave reviews from the rock press.

2015 was also a great year for touring with the band completing an 18-date UK tour with The Answer as well as UK tours with Tyketto and Snakecharmer. Bad Touch’s live shows garnered them praise and support from fans and critics.

In June 2016, Bad Touch embarked on a UK tour with Jared James Nichols, followed by a UK tour in July supporting the Kentucky Headhunters.

In July 2016, the band recorded their second album “Truth Be Told”, which was eventually released in December of that year to great critical acclaim. In November they embarked on a joint UK tour with the Australian band “Massive”.

The following year, during March and April, Bad Touch toured the UK with Broken Witt Rebels under the Planet Rock Roadstars banner, and followed this with a UK tour in April and May supporting Britain’s award-winning blues rock band King King. During the tour, Planet Rock radio play-listed the band’s single “99%” which was remixed for radio by Chris Kimsey (Rolling Stones, Peter Frampton, Killing Joke, Bad Company).

Over the summer they played numerous festivals including Ramblin’ Man, Wildfire, Amplified, Cambridge Rock Festival, Weyfest, and many more as well a supporting Dan Baird and Homemade Sin during their UK tour.

March 2018 saw the guys touring the UK with Skid Row.and with many festivals and a headline tour to follow 2018 looks to be a big year.