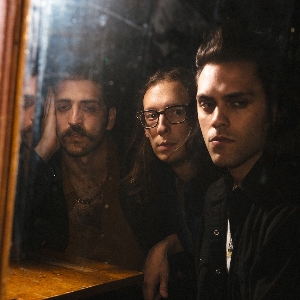 All Bambara performances
Have tickets to sell? – Find out more

Bambara are a Brooklyn-based group who play harsh, punishing post-punk with a distinct Western Gothic bent. Their songs combine walloping drums and dark, twangy guitar riffs with unsettling noise loops and howled, ranting vocals which examine the seedy side of life. Bambara – twin brothers Reid and Blaze Bateh, singer/guitarist and drummer respectively, and bassist William Brookshire – have been evolving their midnight-black noise into something more subtle and expansive ever since the release of their 2013 debut Dreamviolence. That process greatly accelerated on 2018’s Shadow On Everything, their first on Wharf Cat and a huge stride forward for the band both lyrically and sonically.

The album was rapturously received by the press, listeners and their peers. NPR called it a “mesmerising...western, gothic opus,” Bandcamp called the "horror-house rampage" "one of the year's most gripping listens," and Alexis Marshall of Daughters named it his “favorite record of 2018.” Shadow also garnered much acclaim on the other side of the Atlantic. Influential British 6Music DJ Steve Lamacq, dubbed them the best band of 2019’s SXSW, and Joe Talbot of the UK band IDLES said, "The best thing I heard last year was easily Bambara and their album Shadow On Everything." The question was, though, how to follow it?

The group’s fourth – and greatest – album to date, 2020's Stray, will provide an emphatic answer. While the music itself is evocative and propulsive, a fever dream all of its own, the lyrical content pushes the record even further into its own darkly thrilling realm. If the songs on Shadow On Everything were like chapters in a novel, then this time they’re short stories. Short stories connected by death and its effect on the characters in contact with it. “Death is what you make it” runs a lyric in “Sweat,” a line which may very well be the thread that ties the pages of these stories together.

In marrying the maniacal ravings of The Birthday Party and the ugliness of early Swans with the tangled cowpunk of The Gun Club and recent Iceage, Bambara create something wholly idiosyncratic, and ultimately more satisfying than most anything else in the current post-punk landscape.