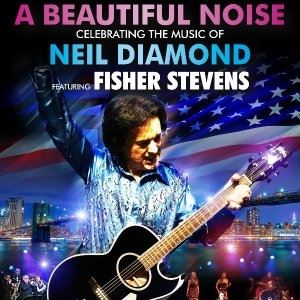 All Beautiful Noise - A Tribute to Neil Diamond performances
Have tickets to sell? – Find out more
Fan-to-Fan Resale Tickets

Over 50 years since his first hit single, with sales of over 130 million records, there is no doubt that the legend that is Neil Diamond is one of the greatest performers and best-selling artists of all time.
Fisher and his full live band a pay homage to five decades of Diamond’s biggest hits including Love On The Rocks, Sweet Caroline, Forever In Blue Jeans, Red Red Wine, I’m A Believer and many more.

Led by Fisher Stevens a full live band and brass orchestra A Beautiful Noise, the internationally acclaimed production direct from London’s West End celebrates the music of Neil Diamond. The show pays homage to Neil Diamond’s incredible career from his teenage dreams of song writing to the Brill Buildings in New York where he became a lone songwriter turning out hit after hit to achieving success as one of the world’s most famous singer/songwriters.
Celebrating all the classic hits of one of the world’s greatest ever singer songwriters, this is a musical adventure unrivalled by any other re visiting over five decades of sparkling musical gems including, Love On The Rocks, Sweet Caroline, Forever In Blue Jeans, Song Sung Blue, I am …I Said, America, Holly Holy, Red Red Wine, I’m A Believer and many more.

Join in the conversation #ABeautifulNoise