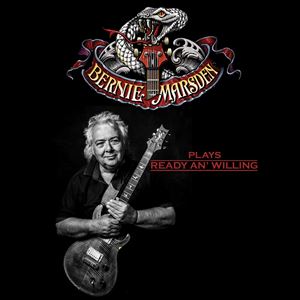 All Bernie Marsden plays Ready An' Willing performances
Have tickets to sell? – Find out more

Bernie Marsden is an English rock and blues guitarist born in Buckingham, England. He is primarily known for his work with Whitesnake having written or co-written many of the group’s hit songs, such as Here I Go Again, Trouble and Fool For Your Lovin’ with David Coverdale. Bernie is also renowned as one of the greatest rock and blues guitarists of all time.

After playing with a Buckingham band called Skinny Cat from the age of 17, Bernie got his first professional gig with UFO in 1972. He next played with Glenn Cornick’s Wild Turkey in 1973, before he joined legendary drummer Cozy Powell’s band Cozy Powell’s Hammer. He then played with Babe Ruth, from 1975–76, before becoming an original member of Paice Ashton Lord in 1977 with Deep Purple founding member Ian Paice and Jon Lord. Bernie’s next gig was to be his career defining moment – joining and forming Whitesnake with David Coverdale. There was a possibility of playing with his boy-time hero Paul McCartney and Wings, but while waiting, he met David Coverdale, and the rest is history…

Bernie has played with some of the greatest rock and roll musicians of all time. He has worked alongside Robert Plant, Paul Weller, Greg Allman, Gary Moore, Ringo Starr, Cozy Powell, Rory Gallagher, Warren Haynes, Joe Bonamassa, and many more.