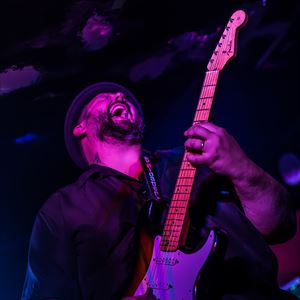 It’s the last chance to catch legendary blues man BIG BOY BLOATER and his band The LiMiTs for a while before they take some time off from touring their exciting, fun and energetic live show – and we are thrilled that we have managed to book them to play at Ropetackle Arts Centre, Shoreham By Sea!  To celebrate they are asking the fans to pick the set list from their extensive back catalogue, so this really will be a show full of ‘the best’ and all the fan favourites!

BIG BOY BLOATER has toured the world with his own bands, and has played guitar behind many legends of Blues, R&B and Rock & Roll, as well as contemporary artists such as Imelda May and Paloma Faith.  His unique modern twist on classic R&B and Blues, interspersed with his multi-faceted influences have earned him multiple plaudits from some of the most influential music pundits around today.  He is a showman of the highest order - mesmerising to watch, with high energy, world-class guitar playing, clever lyrics and tunes that will stay with you for days afterwards!  This is a show not to be missed – catch them while you can!

“One of the great blues men of our time” – JOOLS HOLLAND

“I love this guy…he has a voice that sounds like it’s been soaked in turpentine for the last decade!” CRAIG CHARLES

“I’m a massive fan of Big Boy Bloater, he’s a charismatic boy with a big voice” IMELDA MAY