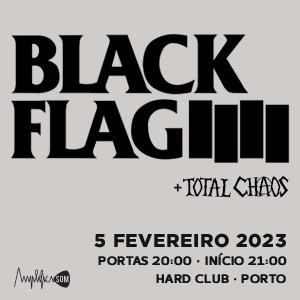 One of the most groundbreaking bands of all time and the one true epitome of hardcore punk, Black Flag are now set to make their long awaited debut in Portugal, almost 50 years after spitting their first chords into an unsuspecting world. Founded in 1976 in Hermosa Beach, California, by guitarist, primary songwriter, and sole continuous member Greg Ginn, Black Flag released their first album – the iconic Damaged – in 1981, and have never stopped making punk history ever since, all while casting an influence over almost every corner of heavy music and several generations of musicians. Now comprising Greg Ginn on guitar, Mike Vallely on vocals, Harley Duggan  on bass, and Charles Wiley on drums, Black Flag will visit Portugal for a single date at Porto’s Hard Club on February 5, 2023, with support from the legendary punk outfit Total Chaos.