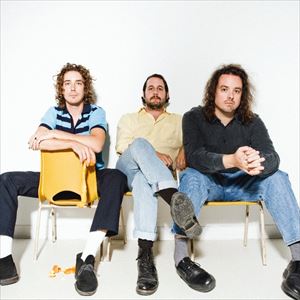 Midland-born, Toronto-based indie rock band Born Ruffians—guitarist/vocalist Luke Lalonde, bassist Mitch DeRosier, and drummer Steve Hamelin—are proof that a group of friends with a tireless work ethic and fierce, grassroots commitment to their labour’s integrity and vision can still go a long, long way. 15 years into their career, the trio isn’t slowing; instead, they’re doubling down on those designations with JUICE, their 6th full-length record. It’s a hyper, earnest, and affecting collection of rock and roll songs, written and polished over a three-year span then sewn together into a cohesive and uniquely enjoyable experience. It’s Born Ruffians as they’ve always been: on their own terms, heads against the wind until their work is done.
"Here’s the thing: you get further as a band when all members embrace the strength of their creative relationship, keeping the external demands and pressures at bay” says Lalonde.
“JUICE kind of reflects that as a title. We’re squeezing more out of this bond that we've forged over so many years.”
JUICE, due on April 3, 2020 via Yep Roc Records, embodies the band's longstanding history, exhuming Born Ruffians' early days in Toronto, while dissecting their relationships with that time and the memories they hold. “Was it all the way it seemed? How I wonder what you see/In that wavy haze,” Lalonde belts on the chorus.“ It was the best of times, it was the worst of times,” Lalonde explains with a grin. Those days were marked by equal doses of anxiety and excitement, living hand to mouth in a basement in downtown Toronto. “That anxiety will exist forever, I think,” says Hamelin. “But the more you take your life into your own hands, it alleviates some of that anxiety.”
JUICE evokes this simplicity: the desperate appreciation for, and necessity of, major key melodies and camaraderie that’s prompted when your back is against the wall. Heard on their own, each single is a neon bolt of energy and storytelling, but placed alongside and tumbling into one another from start to finish, they’re recontextualized as interlocking pieces in a puzzle.
Our collective 21st century spiritual malaise requires a salve, and JUICE is just that: a sweet, delectable nectar from a band that’s lived longer than most. It’s bright and punchy, from the brass section blasts opening the breathless rock and roll sprint of “I Fall In Love Every Night” to the playful throb of Hamelin’s drums on “Breathe.” The plucky gait of “Dedication” completes this opening trio with whistles and percussion blocks framing Lalonde’s sardonic reading of dogged devotion to capitalism, rhyming off would-be Extremely Online listicles: “12 ways to die in a fire, 10 ways to be consumed by desire, 8 things you didn’t know about the all-consuming shadow of this empire.”
This beginning three-track suite is mirrored on the back end by the final three songs, an adventure capped off with “Wavy Haze.” It’s a four-minute wander through Lalonde’s foggy recollections of the band’s beginning hemmed in by cotton-candy guitars and rumbling drums. “Miss the stuff you did not need: attention headaches, nicotine, alcohol, and some amphetamines,” Lalonde declares on the verse. It’s almost like taking stock, counting chips before the next bet. “There’s a bit of pride in what we’ve done, and looking back and looking forward all at the same time,” says DeRosier.
In the end, JUICE is a testament to where Born Ruffians have come from, and a bold, pulpy mission statement for the future. However weird and overwhelming things get, Born Ruffians close out the record by reminding us that they’re in this for the long haul, as Lalonde sings, “You see a light come shining from behind, reminding you that kid is always on your back.”