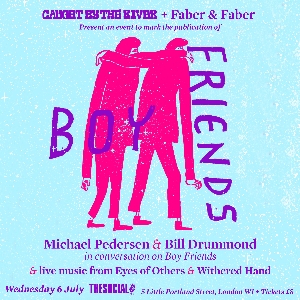 All CAUGHT BY THE RIVER PRESENTS BOY FRIENDS performances

Following the swift sell-out of the first night, Caught by the River (with Faber & Faber) now bring you: Boy Friends by boy friends.
Featuring a waltz through Michael Pedersen's book
Boy Friends
with gaggle of boy friends that feature in the book!

Opening proceedings will be an acoustic set from cult folk-pop-rock troubadour,
Withered Hand
—
said to be 'The UK’s best lyricist' by King Creosote (in The Independent).
At the centre of it all, an in-conversation with
Michael Pedersen
and
Bill Drummond
that may or may not cover: the book in question; male friendship; The Curfew Tower; dead pets; the unique artwork Bill is producing for this event; their Unst adventure.
Closing the show will be a musical unfurling by Heavenly's newest signing
Eyes of Others
— whose inimitable post-pub couldn’t get in the club music could be accused of invoking the spirits of both Arthur Russell and Sorely MacLean (one of whom Eyes of Others is a direct descendent of).