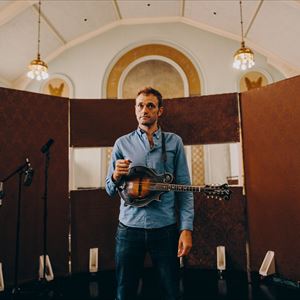 MacArthur Fellow and Grammy Award-winning mandolinist, singer, songwriter Chris Thile, who the Guardian calls 'that rare being: an all-round musician who can settle into any style, from bluegrass to classical' and NPR calls a 'genre-defying musical genius', is a founding member of the critically acclaimed bands Punch Brothers and Nickel Creek. With his broad outlook, Thile creates a distinctly American canon and a new musical aesthetic for performers and audiences alike, giving the listener 'one joyous arc, with the linear melody and vertical harmony blurring into a single web of gossamer beauty' (New York Times).

Most recently, Chris recorded?Laysongs, out on Nonesuch. The album is his first truly solo album: just Thile, his voice, and his mandolin, on new recordings of six original songs and three covers, all of which contextualize and banter with his ideas about spirituality.

'Nowhere has master mandolinist Thile's formidable mastery been more fully realized than on Laysongs. An intimate gaze into the soul of a preternaturally gifted musician.' (**** Songlines)

'As always, Thile's playing is an unpredictable delight, ranging from furious strumming to pointillistic fusillades, and at times his eight-string rings like a church bell.'
(Independent)

Recorded in a converted upstate New York church during the pandemic,'Laysongs' centrepiece is the three-part "Salt (in the Wounds) of the Earth," which was inspired by C.S. Lewis's' The Screwtape Letters. The album also features a song Thile wrote about Dionysus; a performance of the fourth movement of Béla Bartók's Sonata for Solo Violin; "God Is Alive, Magic Is Afoot" based on Buffy Sainte-Marie's adaptation of a Leonard Cohen poem; a cover of bluegrass legend Hazel Dickens' "Won't You Come and Sing for Me," and "Ecclesiastes 2:24," original instrumental loosely modeled after the Prelude from J.S. Bach's Partita for Solo Violin in E Major.

'One of the most extraordinarily gifted musicians on planet Earth. The mandolinist, musician, singer, songwriter, educator, and possessor of one of the purest falsetto voices I've ever heard. I don't know how you would describe this music, but I certainly know if you are a jazz lover, and lover of deeply complex and beautiful music, you're going to love this' (Jamie Cullum, BBC Radio 2)

Sam Amidon, another great Nonesuch artist, opens on all dates following the success of his albums The Following Mountain and Sam Amidon that brought the fresh energy and layered textures of folk to life

Sam has developed his own strong style as a singer and multi-instrumentalist through reworkings of traditional songs, original material, and collaborations with jazz mavericks such as Bill Frisell.

'Amidon's spry banjo and sky-blue voice give this music a gentle centre, light on ego or affectation.' (Uncut, 8/10)

'A delight. An ethereal, electronica-tinged journey through the traditional repertoire.' (Sunday Times, Albums of the Year)

'Amidon, the radical recombinator of traditional folk music, has concocted a delightfully diabolical set of experiments. He transforms familiar Appalachian songs, murder ballads and novelty tunes into new weird ditties imbued with their own compelling power, characters and charm.' (5 stars - Songlines, Albums of the Year)