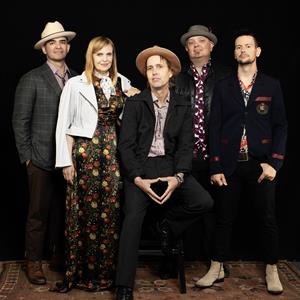 Chuck Prophet - singer, songwriter, guitarist and producer. Chuck started his wild ride back in 1984 when Green on Red plucked him out of Berkeley, CA and put him in the van for an eight-year ride, recording over six albums with them. Green on Red were seminal purveyors of American Roots Rock aka Alt-country and broke up in 1992 just before an entire movement followed in their wake. Since then Chuck has recorded fourteen solo albums and toured and recorded with Lucinda Williams, Aimee Mann, Cake, Alejandro Escovedo and Jonathan Richman. In addition to that, Bruce Springsteen, Ryan Adams, Solomon Burke and Heart have covered his songs.
Chuck’s live shows are second to known and have sold out gigs across the UK featuring slots on festivals like Summertyne, Kilkenny, Glastonbury, Roskilde, etc.

Since those neo-psychedelic Green On Red 80s days, Chuck has been turning out country, folk, blues, and Brill Building classicism. His last visit to European and UK shores with the Mission Express was back in 2017, before the pandemic and before Chuck getting diagnosed and finally beating cancer that floored him for much of this last year. Chuck is back and ready to tour with his Mission Express for his first European shows in six years after being postponed four times.

The cult Californian musician finally returns to promote ‘The Land That Time Forgot’, his latest album out via Yep Roc Records which saw his best reviews to date with a UNCUT Album of the Month and in addition he will have an exclusive tour album available at all shows. Priced out of recording in his beloved hometown, San Francisco, Prophet found himself re-energised in Upstate NY, just a few miles from the Vermont border, and made a record that he describes as “just as much a 21st-century exorcism as it is Americana.” The songs inhabit a world where the protagonists might be on the run from the truant officer, a handsy boss or the Immigration Service. These are love songs that turn political on a dime, infused with personal connections.