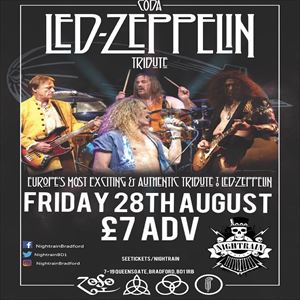 All Coda - Led Zeppelin Tribute performances
Have tickets to sell? – Find out more

CODA - a Tribute to Led Zeppelin are Europe&#39;s most exciting and authentic tribute to Led Zeppelin,
featuring incredible replica costumes and instruments, with a live sound and look unmatched by any
other. They have got a brand new show lined up for this year, celebrating the classic Led Zeppelin II
album. The first set of the show will consist of the whole album, featuring such great tracks as
Whole Lotta Love, Ramble On and lesser-played but still awesome tracks like Living Loving Maid
and the Lemon Song, and the second set will be packed with all the classics, showstoppers and
rockers such as Stairway to Heaven, Rock and Roll and much more!
“A sincere and moving tribute by a group of excellent, nay brilliant musicians who captured the
spirit of the legendary group perfectly.” - Chris Welch, music journalist and author of several books
on Led Zeppelin.