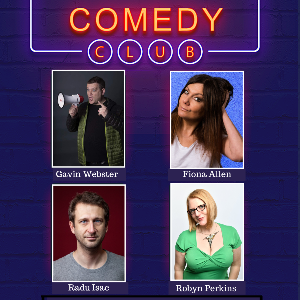 The Noise Next Door
All Comedy Club Special performances

The U.K’s premier improv comedy troupe have taken the comedy world by storm.

Twelve time sell-out veterans of the Edinburgh Fringe Festival and one of the country’s most sought after comedy club headliners, The Noise Next Door leave audiences everywhere in awe of their lightning-quick wit and totally original comedic talents.

The Noise Next Door have appeared on BBC One, BBC Three, ITV1, BBC Radio 1 and BBC Radio 4, they were nominated for a Chortle Award in 2014, and have performed alongside the likes of Michael McIntyre, Al Murray, and Harry Hill. Having received standing ovations in front of corporate dinners, the British forces, secondary school students and even fans at ‘Download’ Heavy Metal music festival, they are also one of the most versatile acts in the business.

Jon Long is a stand up and musical comedian. His cheery and affable stage presence, coupled with a host of acerbic comedy songs have seen him find success in several new act competitions, winning Audience Favourite at the 2016 Musical Comedy Awards.

"Clever gags and witty songs...delivered with laser-guided timing" - Bruce Dessau (Beyond The Joke)

Middle - Esther Manito
Esther Manito is Lebanese-British stand up comedian and winner of Best Show at the Leicester Comedy Festival.

After reaching the finals of So You Think You’re Funny and the Funny Women awards, her debut solo show led to an appearance on Live at the Apollo (BBC Two).

Esther has also supported the likes of Alan Davies, Jason Manford & Jo Brand on tour.
MC - Ross Smith
Since starting gigging in 2015, Ross Smith has taken the comedy circuit (and the internet) by storm. He's a regular at some of the capital's biggest comedy clubs. His personable, relaxed style and contemporary material, underpinned by clever wordplay and self deprecating humour, has made him one of the country's most exciting emerging acts and quick-witted hosts.

Ross has also featured in Karl Pilkington's Sky One sitcom Sick Of It and recently in Apple TV's drama Slow Horses.