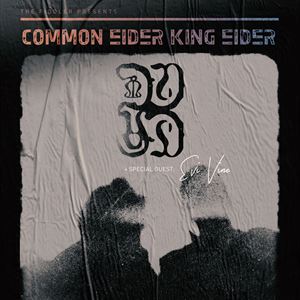 Birthed around the mid-two thousands in the wake of San Francisco’s collapsing psychedelic and art rock scene, and gravitating around the core values and aesthetics of San Francisco’s legendary Tumult and Aquarius Records strongholds, Common Eider, King Eider is an obscure congregation of veteran San Francisco sound sculptors who have established themselves as absolute leaders of the pack and unrivaled masters of creation when it comes to realm of the most darkened, immaterial, and cataclysmic sonic architecture that the human mind can fathom.

Taking cues from revolutionary and mind-expanding artists like Lustmord, Throbbing Gristle, Wardruna, Dead Can Dance, Halo Manash, Arvo Part, and Sunn O))), through their levitating, soul-shattering, and black hole-sized ritualistic black ambience, Common Eider, King Eider have elevated themselves to the rank of near-mystical figureheads in the realm of modern times dark ambient and drone music.

2019 has seen the release on Cold Spring of “Egregore” a ritual for the new dark moon featuring members of La Breiche, Still Volk and Ihan that took place in a tiny cabin in the French Pyrenees; while on October 1st Cyclic Law will release a collaboration album, with C.E.K.E. teaming up with Cober Ord.

“If you like shit like Sunn O))), Swans, GSY!BE, Thisquietarmy, Lustmord, Haxan Cloak, Mamiffer and Sutekh Hexen, then Common Eider, King Eider, will take you on an unforgettable voyage through the most remote corners of your mind and deep into the most hidden crevices of your soul, tunneling into you until your ego completely disintegrates” - CVLT Nation

“It is refreshing to hear an artist not only serve the genre so well but breaks new ground in the process. Highly recommended.” - Avant Music News

“This is really a project to listen to and be a total fan over!” - Echoes and dust['