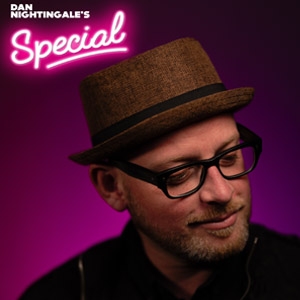 Dan has spent the last two years changing the comedy industry from the inside out, paving new career paths for himself and many others; whilst being one half of the smash-hit podcast Have A Word.

Following on from the triple-extended 2022 tour Smasher; 2023 will see him hit the road again to show even more people what 18,000 monthly patreons, 55,000 YouTube subscribers and one million monthly download viewers already know – that Dan Nightingale’s Special.

"Genuinely hilarious. He has a show that other more famous comedians would be proud of " - Chortle

"It is his powers of observation that make him so entertaining. Outrageously funny!" - Keeping Up With NZ