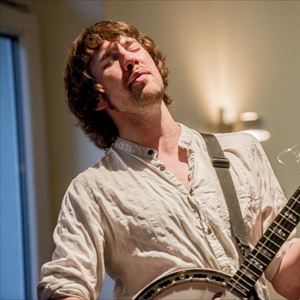 Dan Walsh
All Dan Walsh performances
Describing what BBC Folk Awards Best Musician nominee Dan Walsh does is no easy task! At the heart of it is British, Irish and American folk music delivered with a healthy dose of funky grooves – all performed with his unique and dazzling take on clawhammer style banjo helping to challenge all preconceptions about the instrument. Add to all that poignant songs, astonishing musical departures and lively humour and the result is a truly memorable live show which has wowed audiences across the world from intimate seated rooms to huge dancing crowds in festival fields.
He has recorded five albums to deserved critical acclaim and he is an in demand performer with a hectic touring schedule in the UK, USA, Canada, Australia, New Zealand, India and throughout Europe. He has also released two banjo tablature books. This unique and eclectic musician has stunned audiences across the world.
You can expect to hear jigs and reels, ragas, bluegrass, contemporary songs (including his own) - and you will still be surprised by much of what Dan does! He is a brilliant guitarist too, as if being a leading light on the banjo was not enough.
Full of musical energy and engaging stage presence, Dan will entrance you.