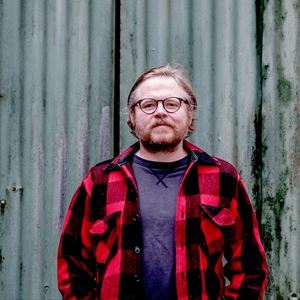 “Some things remain constant... not least Wilson’s unfailing feel for Southern/Celtic soul
melodies, and his eloquence of sentiment never allowing affection for his inspirations to lead
him in the direction of pointless pastiche when he could
break your heart or make you smile
instead”

Danny George Wilson’s formidable credentials go back to his days in seminal UK roots rock
band
Grand Drive with brother Julian, a solo album released on Paris-based tastemaker
label Fargo Records and six albums of consistently high calibre output on Loose Music with
the revolving cast of his
Danny & The Champions of the World incarnation.

In 2016 the
Champs swept the boards at the inaugural UK Americana Awards, winning with Album,
Artist and Song of the Year. Alongside Robin Bennett (The Dreaming Spires, Goldrush, Saint
Etienne) and Tony Poole (Starry Eyed and Laughing) he released an eponymous album as
Bennett Wilson Poole in 2018 (“instant classics... hints of Willie and Levon”Bud Scoppa,
Uncut)
-bagging another UK Americana Awards ‘Artist of the Year’ alongside being voted
Americana UK's ‘Band
of
the Year’.

His latest album,
Another Place, has been acclaimed by press and fans alike, voted
Americana UK's Album of the Year for 2021. A departure for Wilson, the album presents a
vibrant and diverse collection of startling, impressionistic songs created in collaboration
with Sussex-based studio wizard Hamish Benjamin. The album features contributions from
Jeff Tweedy (Wilco), Gerard Love (Teenage Fanclub) and Emma Swift.

Danny & The Champions of the World is a Folk Rock, Rock, Soul band that was formed in London during the summer of 2007 by Danny George Wilson.

The band was formed following the dissolution of Grand Drive in which Danny performed with his brother Julian Wilson. They recorded originally as an impromptu demo session at a farm within the grounds of the Truck Festival. The demo and overall success of the recorded sound prompted Danny to form Danny & the Champions of the World and record their first self-titled album on Loose Music in 2008.

Critics and fans noted a distinct departure from the music of Grand Drive; instead making references to a more Alt Country sound.Danny & The Champions of the World recorded their second album 'Streets of Our Time' in 2010. Danny & The Champions of the World recorded the album whilst on tour with The Magic Numbers and The Drive By Truckers'. Streets of Our Time was met with much critical acclaim and marked an end to Wilson's folk infused leanings.

In February 2011 Danny George Wilson signed a worldwide publishing/ production deal with Southern Crossroads Music and went into the studio to record 'Hearts & Arrows'. The album was mixed by Ted Hutt at his King Size Studios based in Los Angeles. Danny George Wilson recorded 'Tougher Than The Rest' for a Limited Edition Bruce Springsteen tribute 7" EP for Record Store Day, alongside fellow contributors The Magic Numbers, Willie Nile and Billy Franks.

Trevor Moss & Hannah-Lou returned with their new album Quality First, Last & Forever! last June on Heavenly Recordings, the follow up to their entrancing self-titled 2010 debut. Since then, they have continued to capture hearts across the nation with tours of village halls and tin tabernacles around the country. Their recent show at The Social was described by the NME as having "so much harmony here that you forget about how discordant everything else is outside the beautiful world they have built". Produced by Richard Causon with Adem and Dan Carey lending their mixing and production talents, the new record is a defiant leap forward for Trevor & Hannah-Lou, who have penned a modern folk-pop masterpiece.

Katy Rose Bennett:
Katy Rose Bennett has been writing and performing her idiosyncratic brand of folk for over 20 years. October 2020 saw the release of her 6th solo album: ?Where Does It Hurt? An Introduction to Katy Rose Bennett'. Alongside the release of the new album, which comprises of songs from Katy's considerable back catalogue and one new song, Katy will be releasing three singles and touring the UK. She will also be working with theatre-maker Francesca Millican-Slater to develop a music, song, story-telling and spoken word solo piece about her and others' experiences of Functional Neurological Disorder.
"Powerfully delicate...absolutely stunning" Maverick Magazine
?Gentle acoustics from the Nick Drake school? literate songs which ride youth's emotional rollercoaster? strikingly original.? UNCUT
"Sophisticated mix of folk, jazz, pop and rustica." Independent