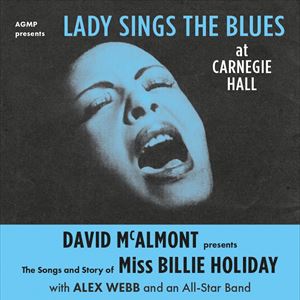 Inspired by the legendary 1956 concert at which Billie Holiday's music was accompanied by extracts from her autobiography ‘Lady Sings The Blues’, David McAlmont gives his unique interpretations of the Lady Day catalogue while quoting from her extraordinary life story, with a band led by pianist / MD Alex Webb.  The show includes many of the most well-known Holiday songs, ranging – as did the Carnegie Hall concert – from the optimism of her 1930s work (What A Little Moonlight Can Do, Fine And Mellow) through her 1940s Torch songs (My Man, I Cover The Waterfront) to her self-penned classics Don’t Explain and Lady Sings The Blues – and many more.

Singer and songwriter David McAlmont, best-known for his collaborations with ex-Suede guitarist Bernard Butler, has long had an interest in jazz, recording with Courtney Pine, Michael Nyman and David Arnold.

Alex Webb is a songwriter, arranger and piano player. He has created a number of words-and-music productions, including the jazz history shows 'Lush Life’ (about composer/arranger Billy Strayhorn), ‘Charlie Parker on Dial’ and ‘Cafe Society Swing’ (which has enjoyed two theatre runs in London and one in New York, where it was awarded the New York Times ‘Critic’s Pick’); he recently premiered a musical about Lena Horne, ‘Stormy’.