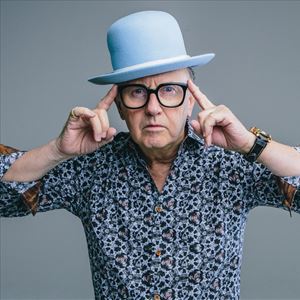 For over 40 years David Rodigan has been the top dog in the ganja-scented, bass heavy-atmosphere of Britain’s reggae dance-halls. The key to his success has been an unsinkable passion for reggae music, which first took a hold of him as a schoolboy when he heard ska music in the early ’60s.

David Rodigan began his reggae broadcasting career in 1978 on BBC Radio London. He moved to Capital Radio in 1979 and remained there for eleven years broadcasting his legendary Roots Rockers show every Saturday night. His credibility was ensured when he began clashing with Jamaica’s champion DJ, Barry G on JBC Radio in Jamaica.

In 1990 he joined the newly legalised Kiss 100 where he presented a variety of daytime shows for 10 years, followed by a decade in his evening specialist slot. He is broadcasting every Sunday evening on BBC 1Xtra to a largely youthful audience, whilst host- ing his Summer Series on BBC Radio 2 on Tuesdays.

He plays his unique collection of customised dub plates and classic recordings extensively across the globe from New York to Tokyo, Berlin to Kingston Jamaica to loyal reggae fans of all ages.