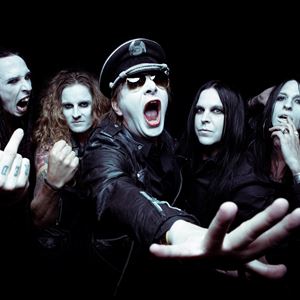 DEATHSTARS were formed in Strömstad, Sweden in 2000 – born of a variety of influences ranging from black and death metal, to hard rock and industrial. They’ve released four full-length studio albums to date; Synthetic Generation (2003), Termination Bliss (2006), Night Electric Night (2009), and The Perfect Cult (2014).

The band has stated that Synthetic Generation was a bit of an experiment, the members all having come from underground extreme metal bands. Termination Bliss garnered the group immediate attention, the band touring heavily with own headliner tours around the planet but also varied different packages, such as with Cradle Of Filth and Korn to mention a couple, and winning music prizes, for example Golden Gods, whilst follow-up Night Electric Night launched them internationally, lauding them enormous praise and landing them a massive tour with Rammstein in arenas throughout Europe. Latest album The Perfect Cult saw them continue their impeccable run and the band is currently in the studio finishing up the next - yet untitled - album