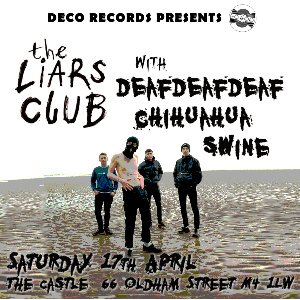 The Liars Club (Barrow/Manchester, UK) Swine
All DECO RECORDS PRESENTS THE LIARS CLUB & GUESTS performances
Have tickets to sell? – Find out more
Over 18s only

Almost 12 months after we originally had them booked to play fingers crossed we will FINALLY be hosting Barrow's finest The Liars Club. at The Castle

“Barrow made us, so we don’t hate it; we deal with it” Noah says. “We’re just four working class lads making an honest living in ‘the man’ industries which fund many lives in our town, but as soon as we’re on stage we become what we want to be… we’re accomplishing our dreams.”Harbingers of an ethos akin to All is Love of fellow next generation punkers Idles and as combustible as 1970s punk-rock heroes The Ruts, The Liars Club pull positivity from bleak corners and have awakened audiences across the North-West.Joining forces with producer Gavin Monaghan (Editors, Goldblade, The Blinders), debut EP Dormant takes a unique view of the world whether tackling austerity, physical and mental abuse in relationships or “the never-ending repetition of culturalism in modern day society.”

The Liars Club is not a place of violence or hate; it’s a haven for people to come to. We are theirs and they are ours,” they say. Regardless of where you’re from, The Liars Club welcomes everyone. No need to present a member’s card at the door, just prepare to have your pants set on fire.

Support is from some of our favourites:

Born out of what was possibly the hardest year for this band, including an enforced name change shortly before Covid hit; Nothingness is an expression of the year, a nihilistic anthem for a doomed generation.

SWINE - Music for the Fools Britannia.