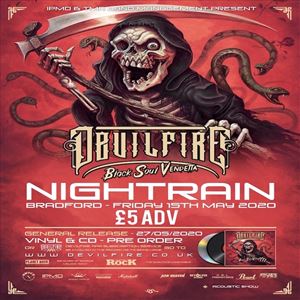 Devilfire
All Devilfire performances
Have tickets to sell? – Find out more

t’s said that some of the greatest bands of our time have been forged on the road, Devilfire is no exception…

…Devilfire began in Birmingham during a studio session in 2013 when producer Alex Cooper (Shy, Spike of the Quireboys, Ginger) was working with with Uli Jon Roth drummer Lars Wickett. Alex revealed his grand plan for a Birmingham based melodic rock band and gave Lars a taster of the kind of music he was working on. Lars suggested they should approach Davey Bennett (Pop Will Eat Itself) which they did however; due to touring commitments and production schedules 3 long years passed, filled with writing and planning , before, in 2016, things finally fell into place.

2017 saw them gigging to 2000 capacity sold out venues supporting Tarja in Europe plus a sold out festival crowd at Hard Rock Hell AOR was the icing on the cake. Their debut album, released in Oct 2017 was very well received by reviewers check it out https://www.devilfire.co.uk/reviews