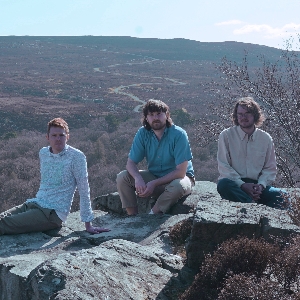 After the propulsive guitar-driven rush of his debut LP Eagletism, Dog Daisies a.k.a Ste Hudson seeks nocturnal adventure on his latest album. 2019’s Eagletism was a late-summer surge up the M6 northbound; anthemic indie-pop and frazzled electronics crackled together over themes of time-travel and the great outdoors. Described as like the film ‘Stand by Me’ put to music and set on a motorway, it featured on critic’s end-of-year lists and garnered repeated spins on BBC 6 Music.

Moonbathing, out October 29th via Bingo Records, whilst equally cinematic, is a far darker, introspective record.

“As a kid, I used to fall asleep in a creaky captain’s bed with a ghetto-blaster next to my head. All my favourite albums were ones I could fall asleep to. Each night I’d set off and see how far I got before nodding off.”

Like dreams, the songs manage to be at once emotionally direct, yet wrapped in a foggy midnight magic.  Lyrics and melodies leave a trail of breadcrumbs pointing homewards, yet the music is portentous and jagged, like a maze to be navigated.

“I wanted this record to feel like a journey in the dark, parts of it to feel familiar and comforting and other parts to feel disorientating.  Lyrically, some of the songs say lots of things at once. I think this is because I’ve always felt conflicted about pretty much everything- how to be a good person, how to smile when you feel doomed… whether to have toast or cereal for breakfast. I hope it captures that late-night feeling when the world seems frozen tight, you can hear the blood pumping through your veins in your pillow and your mind is racing.”

Piano features prominently, recorded by drummer/producer Zac Barfoot (Sun Drift) at his grandparents’ house in Silverdale, Cumbria and during after-hours recording sessions on the baby grand of the local coffee shop. The rest was finished at Ste’s home in Lancaster save for a few trusty contributions from various friends including a ripping French horn solo on single Fenham Carr from old label-mate Ben Hall of Mr Ben and the Bens.

In Moonbathing, Dog Daisies offer insight into an alternate world to that in Eagletism, equally realised but opposite in mood. Still effortlessly emotive and lyrically complex, Hudson's latest work presents a murky underside to the Dog Daisies people know, which, once you are invested, reveals itself as thought provoking and beautiful.