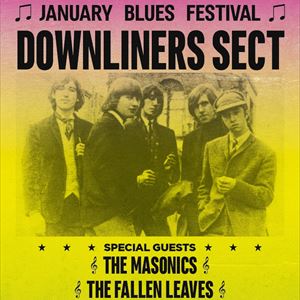 "We were quite influenced by the Downliners Sect" - David Bowie

Contemporaries of The Rolling Stones and The Yardbirds, the Downliners Sect was formed by deerstalker-hatted rhythm guitarist Don Craine in the spring of 1963. Their brash and exciting brand of R&B soon gained them a residency at London's Studio 51 club where they recorded their first E.P. At Nite in Great Newport Street, now a rare collectors' item. A version of Jimmy Reed's Baby What's Wrong became the unit's first single for EMI and entered the charts in its first week of release. This was followed by Little Egypt which brought international interest and took the band into the Swedish top 10.

The group went on to record many classic R&B singles as well as three albums, The Sect, The Country Sect and The Rock Sects In which is notable for the inclusion of Why Don't You Smile Now which was part-composed by Lou Reed and John Cale prior to their founding of The Velvet Underground. A ghoulish E.P. The Sect Sing Sick Songs also gained them much notoriety and a blanket radio ban. After the release of the Graham Gouldman penned Cost of Living, a final one-off Pye single I Can't Get Away From You was released before the group disbanded.
The Masonics were formed from the ashes of Thee Milkshakes and featuring Mickey Hampshire (vocals), Bruce Brand (Drums) and John Gibbs (Bass) with guest vocals from Miss Ludella Black. Musically, The Masonics are influenced by Chuck Berry, Link Wray, The Sonics, Bo Diddley, Johnny Moped and The Beatles.