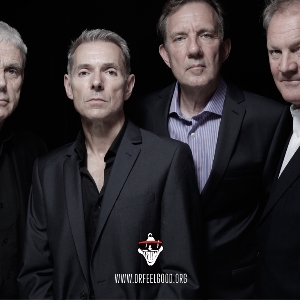 Dr. Feelgood remains one of the most popular and exciting live rhythm and blues acts in the world.  The raw and uncompromising style of their performance resulted in the album, Stupidity, that immediately went to the Number One position in the UK Charts.
Formed on Canvey Island, Essex, in the arly 1970s, Dr. Feelgood have enjoyed global success with a string of hit singles including Milk & Alcohol, Down at The Doctors, Roxette, Back in The Night, She Does it Right, Going Back Home and See You Later Alligator, which gave the group their first Gold Record.
The line-up has changed since those early days but these doctors still have the Feelgood factor!  The current lineup features the rhythm section, Kevin Morris on drums and Phil Mitchell on bass, both 34 years with the band, and Steve Walwyn on guitar who has been with the band for 28 years.  Vocalist, Robert Kane (formerly of The Animals) is the most recent addition - joining in 1999 after the tragic death of Lee Brilleaux.  The band continues to tour extensively throughout the world and enjoys a loyal following at home and abroad.  http://drfeelgood.org/