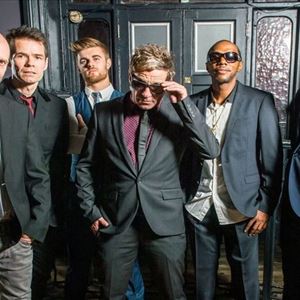 Readying the release of what will be their ninth studio album, DUB PISTOLS are delighted to announce a full UK & Irish tour this Autumn. Plotting a stretch of shows, the ‘Frontline’ tour will see the electronic/dub icons previewing material from their upcoming album of the same name.

Speaking about what to expect from the upcoming tour, lead Pistol Barry Ashworth says:
“I can't wait to hit the road again with a new album and a new show. Saddle up, the Pistoleros are riding into a town or city near you…

Since their formation in 1996, DUB PISTOLS have survived international terrorism, inter-band warfare and the wheels falling off their operation numerous times.

From major deals with the mighty Geffen Records to collaborations with greats like Terry Hall (ex-Specials), Gregory Isaacs, Busta Rhymes and Horace Andy; extensive SOLD OUT tours around the world, to Top 40 Chart Success across three decades (including 2015’s ‘Return of The Pistoleros’), the Dub Pistols story is as twisting and triumphant as their inimitable sound.

Every bit the riotous collision of drum & bass, hip-hop, ska, dub and punk, Dub Pistols maverick approach to music continues to inspire through the generations to this day. Now a slickly drilled outfit, they have lost none of their kick-ass vitality and renegade edge wherever they rock up to play.

With their ninth studio album, ‘Frontline’, lined up for release in November 2022 and a full UK tour in support,
stay tuned for further details about the return of Dub Pistols in the coming weeks…