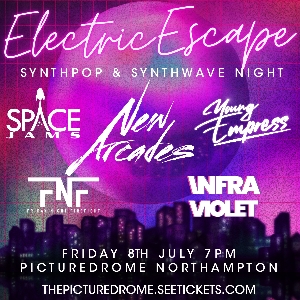 Their music has appeared on films such as ‘Already Tomorrow in Hong Kong’ and ‘A Light Beneath Their Feet’ and they have also contributed an exclusive track for the mobile game ‘RetroDrive’.

They have previously played various shows in the U.K as well as a live studio session for BBC Radio.

They released their second album, In the Deepest of Dreams, on September 17th 2021 via New Retro Wave Records.

They are currently releasing music through AWAL and New Retro Wave Records.

Young Empress are a Synthwave duo inspired by movie soundtracks and 80’s nostalgia. With a shared love of classic synths and haunting guitars, powerful harmonies and punchy 80’s inspired drums. Their love of film and television has helped them shape a sound that transports you straight from your 9-5 right onto the set of stranger things. Their debut single Peacemaker has bounced from the studio with everything needed for an epic cinematic soundtrack. The duo signed to Aztec Records in 2021 and are due to release their debut album later this year.

A blend of reflective songwriting, 80s stylings and pop punk inspired delivery, Friday Night Firefight catches both aesthetic of SynthWave artists such as The Midnight and the energy of Angels & Airwaves. Friday Night Firefight, from the south coast of the UK, have just released their debut album 'Invisible Kids' through Aztec Records.

“A record full of heart that others will struggle to match. Stunning. Distinctive, strong, effortless…inspiringly catchy. The next step of Synthwave.” 4/5 THE EXPRESS

Plus very special guest Space Jams: sending off the night with a DJ set of all things 80’s and Synthwave.