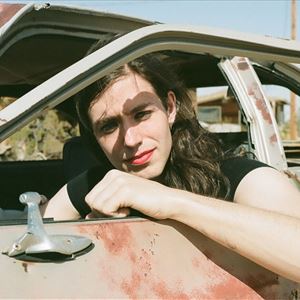 
Ezra Furman (Pronouns: she/they/her/them)
Through 5 critically acclaimed solo albums, 3 albums with her former band the Harpoons as well as creating the original soundtrack for the hit Netflix Original Series 'Sex Education,' Ezra Furman has amassed an arsenal of much-loved music. Exploring themes of identity, religion, political angst, love, anxiety, Furman has become an icon for the misunderstood and the oppressed. Her live show has built a fierce reputation with The Guardian dubbing her "the most compelling live act you can see right now." Furman has also written a book on Lou Reed's classic album 'Transformer' and the relationship the record has with her own life and awakening as part of the 33 1/3 Series. Her new singles ?Point Me Toward The Real'and 'Book Of Our Names', produced by John Congleton (Angel Olsen, Future Islands, Sharon Van Etten) offers a first glimpse at new material to come.

'One of the most talented songwriters of the last decade' - Spectrum Culture
Click here Ezra Furman - "Book Of Our Names" (Lyric Video) - YouTube Say you are coming, join the Facebook event page here
THE GOLDEN DREGS
The Golden Dregs might be on the project of just one man, Benjamin Woods, but beyond that it's a lot of different things. ?It's adopted the guise of a bar-band, a lonely man with a piano, a singer with a backing band, and an awkward and insecure karaoke performance,? says Woods. ?I think of The Golden Dregs as a project as opposed to a group or a person. It's a platform for me to explore different musical avenues.? Through the alter ego that is The Golden Dregs, a modern-day musical outlaw can be observed, as Woods splices his signature baritone vocals with hints of americana, post-punk, and indie rock! ?A sense of maturity can certainly be detected in the pool of influence bearing on its weather-beaten outlook, as well as its range of stylistic cadences; traces of alt-country, neo-psych and glam-rock coalescing in a skewed trinity that unfolds with tranquil, flowing fashion, furnished with a smooth artistic acumen that proves a rare trait.? - The Line Of Best Fit