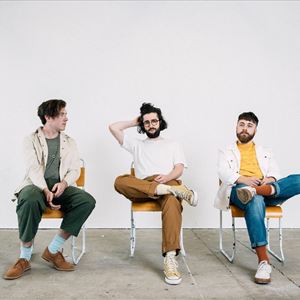 Scottish alt-rockers Fatherson returned earlier this year with sensational fourth LP 'Normal Fears'. To celebrate, the Kilmarnock formed trio are heading across the UK on an intimate run of shows - with the tour kicking off this week, we caught up with the band to discuss the album, what to expect from their live performances and more.

Glasgow-based three-piece Fatherson are back, but not as you know them. ? End Of The World, the first new music from the band in three years, is a dreamy, synths-drenched beauty shot through with mischief. ? “End Of The World is about going through tough times and coming out the other side. Suddenly you realise that you’re actually fine. So what if someone doesn’t love you anymore? Nevermind that life isn’t as it used to be. It’s definitely a bit tongue-in-cheek. If the world really was ending, you’d want to forget all the shit that’s been thrown at you and go out and have fun.”?

Forming in Kilmarnock, Scotland, in early 2010, Fatherson immediately captured hearts with their raw, honest alt-rock sound. Debut album I Am an Island and 2016 follow-up Open Book were masterclasses in full-throttle rock songwriting, and garnered support from (and tours alongside) their north-of-the-border brethren in Biffy Clyro, Frightened Rabbit, Idlewild and Twin Atlantic, as well as further runs alongside the likes of Kings Of Leon, Augustines, Enter Shikari and more.