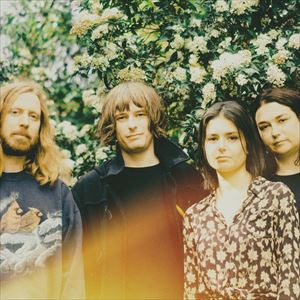 A dense swirl of multilayered and orchestral swathes of guitar, where influences both sacred and profane meet to confect a divine offering that is formed of a particular type of musical alchemy. This is the higher plane where Flyying Colours exist.

Founders Brümmer and Gemma O'Connor quickly became mainstays of the thriving Melbourne shoegaze scene in 2013, and joined by bassist Melanie Barbaro and drummer Andy Lloyd Russell they released two critically acclaimed EPs and debut album ‘Mindfullness’. The band have toured with The Jesus & Mary Chain, Johnny Marr, The Black Angels, Brian Jonestown Massacre, A Place To Bury Strangers, Pinkshinyultrablast and many more, as well as headlining their own international dates.

The recording of their expansive new LP ‘Fantasy Country’ was exhaustive and they admit to not knowing if it would ever see completion. The startling new long player shows Flyying Colours assured and confident in their songwriting and meticulous in their studio craft though, enlivening their trademark wall of sound with trebly widescreen panoramas recalling The Cure at their most epic and the Aussie sunshine psychedelia of Tame Impala at their most luminescent.

“I feel like you can hear the welcome struggle in the songs sometimes” we’re told, “but that could just be me”.