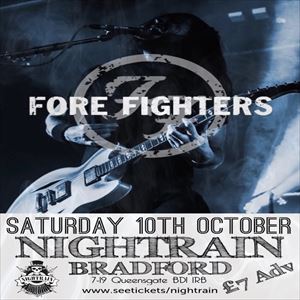 Recently, a number of the most experienced Foo Fighters tribute band members came together to play a memorial concert for a dear friend, Iain Angus.
Iain was the original 'Fake David' and founding member of Four Fighters, the definitive Foo Fighters tribute band.
The show was met with such an incredible response that the remaining Four Fighters and the matchless Dan Gordon, from Newcastle based tribute Fu Fighters, decided to join forces and create a veritable Foo tribute super-group!

During our Foo Fighters tribute tenure we've played many of the biggest tribute festivals in the UK, Ireland, Europe even shows in the Middle East & South America. Our live shows are the same explosive events and the band goes to every effort to reproduce the raw power and dynamics of the Foo Fighters.