Funk at The Bridge 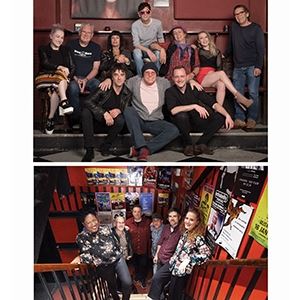 All Funk at The Bridge performances
Have tickets to sell? – Find out more

A night of top notch Funk&Soul at Under The Bridge with two outstanding bands – British soul pioneers KOKOMO and one of the hottest funk/soul bands in the UK: CROWD COMPANY. Plus legendary DJ Perry Louis. This will be an epic night – early booking recommended!

British soul pioneers, KOKOMO, built their reputation and loyal following through their incredible live shows. Their debut album is considered a classic whilst the band’s reputation as one of the finest , funkiest ‘groove’ units ever to come out of this country remains intact.

Featuring some of UK's finest musicians and vocalists, recruited from bands such as Arrival, Joe Cocker’s Grease Band, King Crimson... who shared a deep passion for American Soul music, Kokomo were in a class of their own.  Bob Dylan, who was signed to the same label, also admired the group — when Kokomo visited New York that July to launch their album in America, Dylan recruited them to the early sessions for his forthcoming ‘Desire’ album.

Since their reunion in 2014 Kokomo continue to sell out shows and have preserved their reputation as one of the finest 'groove' soul funk bands in the UK.

Kokomo’s enduring pedigree is evidenced by how many of the original members, still in the band today,  have gone on to enjoy considerable success in their subsequent careers. Jim Mullen is now a much feted award-winning jazz guitarist, Neil Hubbard’s discography is impressive to say the least (Joe Coker, Robert Palmer, Bryan Ferry, BB King), Jody Linscott continues to work with everyone from McCartney to Will Young, Mel Collins’ sax work has graced albums and gigs by Dire Straits, Eric Clapton, and the Rolling Stones, Tony O’Malley joined 10CC and then went onto forged a successful solo career here and in Europe, Frank Collins toured and recorded with Terence Trent D’Arby.

Kokomo come to Under The Bridge as part of the popular ‘Funk At The Bridge’ night, along with acclaimed UK funk soul band Crowd Company.  Early booking recommended!

An 8 piece band with a modern take on 70s soul funk. One of the UK’s top modern funk bands, Crowd Company are riding high following acclaim and airplay of their latest album 'Lowdown'. The band is championed by Craig Charles of BBC Radio 6. He calls them “Top Class!” and their 2019 single was one of his ‘Best Releases of 2019’. Their new album is one of his ‘Top Picks for 2020’.

"Top Class! Crowd Company are knocking it out of the park" - Craig Charles BBC Radio 6
"A groove to wake the dead" Music Vein
“Lowdown” is an instant classic “ - Blues & Soul magazine


Crowd Company are renowned for dynamic, engaging live performances. Frequently selling out headline gigs they have also toured with / shared the stage with the likes of The Meters’ George Porter Jr, Soulive, Daptone Records Saun&Starr.

Perry Louis is one of the UK’s top funk/soul/rare groove DJs.  Perry has DJ’d all over the UK and abroad including Ireland, Den­mark and Japan. He has a  He has an enviable record collection of over 20,000 LPs.  Perry is also one of the country’s top old school jazz dancers and founder of JazzCotech.