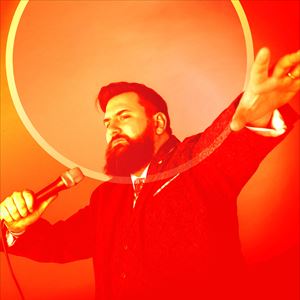 The entrance to the Gilded Balloon Basement is on Rose Street Lane South.
Accessibility: the GB Basement is accessed by 12 stairs down.
Doors open 45min prior to show start time (including the bar and box office). So come on down early and grab a drink and seat!
We have a lovely wee bar with a wide selection of drinks and snacks.

Last year I wrote this bit for my flyer and promised that I’d deliver an hour of pure comedy, no gimmicks, no sad stories. That all went out the window a few weeks before the festival when my wife nearly died, and I had to rewrite the show. It made a complete mockery of everything I’d promised on the flyer. The show ended up being very successful, so it turns out people never hold you to what’s written on the back of these flyers anyway.

In the last twelve months my wife has resolutely refused to nearly die, so it’s going to be missing the emotional impact of last year. There’s nothing I can do about that, I’ve tried. I messed with the brakes on her car, put stuff in her food, no dice. But then again, it’s 2019, everyone is depressed and anxious, the planet is dying and Boris Johnson is Prime Minister. So that’s probably dark enough to be getting on with.

This is my best effort at a defiant battle cry against the gloom.
It’s called ‘Smile’.