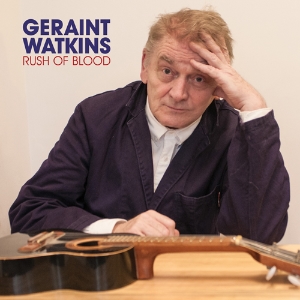 “Attempting to designate a musical category for Wales native Geraint Watkins is not without its challenges, but the perspicacious Nick Lowe once observed that he could be filed as “the missing link between Paulo Conte and Howlin’ Wolf.”

For so many years a keystone of the bands of Nick Lowe, Van Morrison, Bill Wyman’s Rhythm Kings, Dave Edmunds and countless more, Geraint Watkins is also a revered creator of his own sublime music, much of which has already been perfectly captured in a handful of solo albums.For 2019’s RUSH OF BLOOD,

Geraint found a new and unlikely collaborator in the form of Simon Ratcliffe of Basement Jaxx to push his boundaries even further. This unique aggregation - aided by some master musicians has produced what will surely come to be regarded as the finest yet of Watkins’ solo projects.