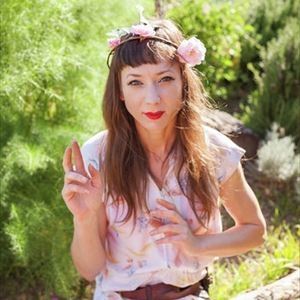 Giant Drag’s Annie Hardy has been through several incarnations at this point; the girl we came to know and love, voted 50th Coolest Person in The World by NME Magazine back in the day. Then came Annie Hardy 2.0 who gave us the chaotic yet magical Giant Drag Farewell Tour. Post-farewell Hardy has seen much loss and tragedy, her infant son and his father both died within the same year, friend and bassist Alvin DeGuzman died of cancer and even her cat was tragically killed. Through it all, somehow, she has transmuted her pain into glorious works of art such as 2017’s debut solo LP ‘Rules’ (Yeah! Right Records/Full Psycho Records) and in so doing has been transformed into Annie Hardy 3.0, a ballsy powerhouse of freestyling comedy mastery with the same vulnerability and tender heart that has always been her mainstay.  This winter she will triumphantly return to Europe and UK to take Giant Drag for a spin once more, partially to promote ‘Hearts & Unicorns’ being released on vinyl by Yeah! Right Records but also to promote her new solo EP ‘Saves’ which is out now digitally on Full Psycho Records. The EP is a themed record of all what Hardy calls “flow state songs that came out finished from start to end, as if I was receiving a fax from the 7th dimension”, it features guest appearances by Don DeVore (Collapsing Scenery, Ink and Dagger), Ryan Rapsys (Euphone, Joan of Arc) and is produced by Hardy and Collin Deatherage. The Resurrection Cum Back Tour (full dates below) will reach the UK/EU in late January/early February and promises the classic grungey rock ballad favourites and some new antics, courtesy of Annie Hardy 3.0.

Annie explains the unusual story of how the tour has come about, “All I did was post something on social media to celebrate the six year anniversary of the Giant Drag farewell tour which forever changed my life. I tagged Dr. Kiko and Amos Memon who had played drums.  I made an IG post about the tour and Kiko said “let’s do it again!” To which I replied “yes let’s!” Not thinking I’d be faced with having to actually leave my cat Goostine and get on an airplane.  To my shock and horror Kiko has put together in four days what usually takes an agent 9 weeks to do and it would appear that I’m coming back to see my people in Europe and UK! The best part is that, like last tour, people are helping me out of the kindness of their hearts and because they think I’m a good person and believe in my talent. Quite a change of pace from the projections of the fallen people that surround me here in America. It’s life affirming and validating and restorative to my spirit to be able to come back and take Giant Drag on another run around the only place that matters, Europe and the United Kingdom. My good friend Colin Deatherage will be playing drums on the tour with me. This tour, which I’m calling Cum Back Tour for the time being, will be cast with people who mirror back to me my own positive traits. I’ve had fatal humility for the past few years. Fuck that shit.

I operate in the flow state, that space of inspiration & creativity that exists outside of time and space where all you require is freely given to you by the universe, completely effortlessly, merely because you’re allowing it to come in. Kiko is whirlwinding through booking his first tour with the greatest of ease operating through this principle.

In life and with my music and professional career, the more I try, the worse something gets messed up. The less I try to exert control over things, the bigger, bolder and more beautiful life continues to get. I’m excited to hit the road with an all sober touring party of angelic souls and be able to experience these beautiful countries with a clear mind and balanced spirit. Even though it’s going to be cold as balls.” Annie Hardy

Support on all dates comes from sonically formidable Amsterdam based duo Deutsche Ashram, who are set to release their second album, and neo-pop opus ‘Whisper Om’ via Wormer Bros in January 2020.