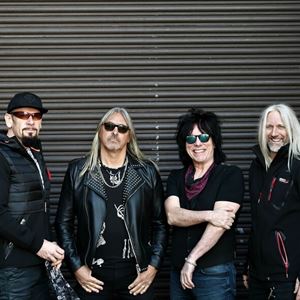 Grand Slam Starseed
All Grand Slam performances
Have tickets to sell? – Find out more
THIS EVENT WILL BE RESCHEDULED TO 2021 - ALL TICKETS VALID FOR NEW DATE

Back in the post-Lizzy days, Laurence Archer wrote and performed with Phil Lynott.  Grand Slam was cut short in it’s prime, leaving a hole in the fabric of rock music. Laurence has nurtured a long-term plan to rebuild the Grand Slam machine, and here it is, blue printed and ready to race.

This new band (Laurence along with compadres Mike Dyer, Benjy Reid and Dave Boyce), honours the traditions of rock and Laurence’s song writing dynasty, but also looks to the future – the classic tracks sit alongside a set of brand spanking new rock anthems that embody the same ethos of freedom, positivity and adrenalin that ran through Grand Slam in 1984.

With this pedigree, it is no surprise that this band is a live monster, ready and raring to ransack stages around the world.

To top it all, new album Hit the Ground will be released on Marshall Records on November 22nd last year.