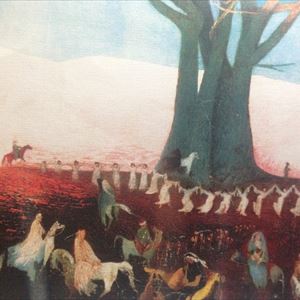 Now based in London, formerly Screaming Tea Party's vocalist Koichi Yamanoha delivers a cinematic and experimental sound through his new solo project under the name Grimm Grimm.
Following his debut 'Hazy Eyes Maybe' released by Pickpocket Records - owned by the shoegaze god, Kevin Shields (My Bloody Valentine) -, the sophomore album 'Cliffhanger' leds a soft psychedelic revolution, melting the folk-inspired acoustics, a common motif which defines his work, to layers of effects and harmonies.
Baroque folk, futurist lyricism and electroacoustic oddities characterize this new experimental work.There are opaque, semi-conscious pop deconstructions such as 'Afraid' or 'Take Me Down to Coney Island' as well as daydream songs such as 'Ballad of a Cell Membrane' comparable to the sonic fragility of Syd Barrett's later recordings and the cosmic folk leanings of Vashti Bunyan.

"Vast Baroque landscapes are painted with quirky drum loops and translucent dream journal poetics, while the general atmosphere is conduced by layers of reverberated guitars. The result is a tender and engaging listen that evokes images of a turquoise dawn heaving with a sorrowful mist." Louder Than War

'All sonic matter is reduced to its most primitive, homogenous form.' ATTN: magazine