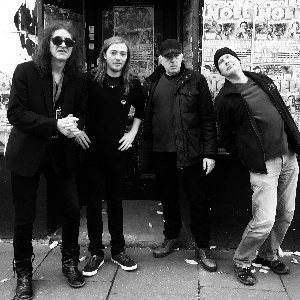 Born in 1978, out of the ashes of the Sonic Assassins, Hawklords was the brainchild of the late, great Robert Calvert. The band's debut release, on the Charisma label, was the album 25 Years On (later editions were released simply as "Hawklords"). It featured eight excellent tracks, all but one co-written by Calvert, and marked a significant departure from the spacey sounds of earlier Hawkwind material. 25 Years On peaked at number 48 in the charts. Two singles were also released: Psi Power and 25 Years.
Barney Bubbles was involved in the design, and the stage sets for the supporting tour. The overall idea was based on a company called Pan Transcendental Industries, which was a factory that manufactured car doors to replace angels' wings - a very avant-garde mixture of Fritz Lang and Mao Tse Tung visually.

In 1983 Barney left the planet.
In 1988 Robert Calvert headed for the gods alone know where.

Now it's the 21st century. After more than 25 years of social research the Hawklords have regrouped to bring space rock back to the people.