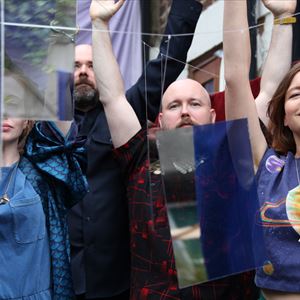 Hen Ogledd
All Hen Ogledd performances
Presented by Bristol Beacon
Standing show
Age: 16+ (Under 18s to be accompanied by an adult)

Listening to Hen Ogledd’s eclectic, off-kilter pop feels like embarking on a cosmic voyage; whether singing about the joys of wild swimming or the very real prospect of human extinction the quartet does so with a playful, astute wit and infectious charisma.

Formed by Richard Dawson and Rhodri Davies in 2012, with Dawn Bothwell and Sally Pilkington joining after, the band’s sonic approach is suitably idiosyncratic, citing far-ranging influences from ABBA to 12th century composer Hildegard von Bingen. Illustrating this scope, their most recent release ‘Free Humans’ “is an ambitious, progress, intelligent and experimental take on pop music” (The Quietus).