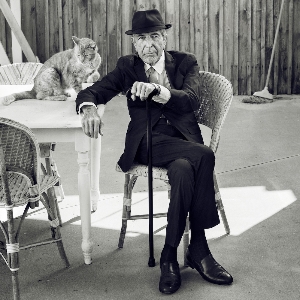 All HIC: HALLELUJAH: LEONARD COHEN, A JOURNEY, A SONG performances

Winner of the latest Audience Choice vote,
HALLELUJAH: Leonard Cohen, A Journey, A Song is a definitive exploration of singersongwriter Leonard Cohen as seen through the prism of his internationally renowned hymn, “Hallelujah.” This feature-length documentary weaves together three creative strands: The songwriter and his times; the song’s dramatic journey from record label reject to chart-topping hit; and moving testimonies from major recording artists for whom “Hallelujah” has become a personal touchstone. Approved for production by Leonard Cohen just before his 80th birthday in 2014, the film accesses a wealth of never-before-seen archival materials from the Cohen Trust including Cohen’s personal notebooks, journals and photographs, performance footage, and extremely rare audio recordings and interviews.

".. A layered portrait of Cohen’s life (from poet to rock star to monk to comeback king) while always returning to the song that defined him." - The Times

"Hallelujah is one for the fans, thorough and informative, like a set of cinematic liner notes, largely content to marvel at the majesty of its subject and the vibrant afterlife of his work." - The Guardian

"An affectionate and open-hearted tribute to Cohen and his work, with an emphasis on the one song that might lure in the occasional uninitiated viewer." - The Wrap

Programme Details
The venue is open all day, so why not come along early to grab a drink and a snack? The programme run time includes an allowance for introductions and up to three trailers. While we will endeavour to accommodate latecomers, this may not always be possible. Please note that we reserve the right to refuse entry, without a refund, to anyone arriving after the advertised start time.

Please note the pedestrian entrance to Princes Quay is either via the Quayside entrance (next to Nandos) or via the footpath from Waterhouse Lane / Bonus Arena. Both entrances off Carr Lane are closed after 6pm. The car park entrance remains unaffected.

Contact Us
If you have any questions or suggestions, please drop us a line at hello@hullindependentcinema.com or on social media.

Ticket Terms and Conditions
If any tickets remain unsold they can be purchased on the door on the night of the screening, but we strongly advise buying in advance. Advance tickets must be purchased; we cannot reserve tickets. Tickets are non-refundable and non-exchangeable. If you purchase a member, student or 25 and under ticket, your membership card, student or personal ID MUST be presented along with your ticket on the door when you come to a film. If you do not have your card or ID we reserve the right to charge the non-discount rate for your ticket.