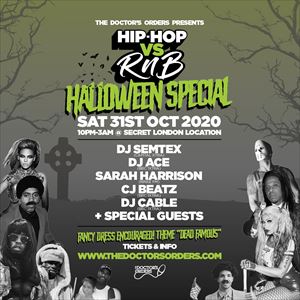 (ADVANCE TICKETS ONLY – ALL AUTOMATICALLY REFUNDED IN CASE OF CANCELLATION)

(ADVANCE TICKETS ONLY – ALL AUTOMATICALLY REFUNDED IN CASE OF CANCELLATION)

London’s No.1 Hip-Hop and RnB party has assembled the best line up of DJs in the city for their first Halloween special and their first BIG throwdown after lockdown.

The hugely popular Hip-Hop vs RnB throws one of their most exciting events to date at one of the most amazing venues the city has to offer (all will be revealed). Expect all the hottest brand new bangers as well as your throwback favourites from this dream team of DJs that really is the best line up of UK talent you will see and hear this year.

DJ Semtex is so influential that everyone from Drake to Dizzee have credited him with helping his career. He has rocked clubs & festivals around and always brings the heat focussed on the hottest sounds right now.

DJ Ace made his name alongside partner Vis and is the only DJ still on 1Xtra since it’s launch. His skills have seen him named the Ace of Clubz as he tears up every dance-floor he is near.

Sarah Harrison has been making waves on the underground club scene for a minute, waves that have seen her land a regular spot on Rinse FM. Our Hip-Hop vs RnB resident is all about the brand new heat she will keen the party blazing.

DJ Cable and CJ Beatz have long been part of the Hip-Hop vs RnB family and continue to be two of the hardest working and best loved DJs in the country. They will be playing a ‘Thriller’ of a set.

Grab your cheap advance tickets for this incredible party now. This is going to be the biggest Hip-Hop & RnB rave of the year.